Debora Spar is the President of Barnard College. Besides being a scholar on issues of international political economy and a former professor at Harvard Business School, Spar is a zealous advocate of women's education and leadership. END_OF_DOCUMENT_TOKEN_TO_BE_REPLACED

Betsey Stevenson teaches Public Policy at the University of Michigan Gerald R. Ford School of Public Policy and serves on President Obama’s Council of Economic Advisors. Her research is focused on how public policy impacts the labor market, particularly the experience of women in the labor market, the economics of the family, and subjective well-being. END_OF_DOCUMENT_TOKEN_TO_BE_REPLACED

Rebecca Shambaugh is a leadership strategist and the founder of Women in Leadership and Learning, an executive leadership development program. Shambaugh has over 20 years of experience working with leaders and organizations on culture transformation, communication, and strategic thinking. END_OF_DOCUMENT_TOKEN_TO_BE_REPLACED

You’ve probably already read her best-selling book, “Lean In: Women, Work, and the Will to Lead,” but we couldn’t resist adding Sheryl Sandberg to our list of Thought Leaders. As the COO of Facebook and having given a very popular TEDTalk in 2010, Sheryl Sandberg has become a household name for professional women. END_OF_DOCUMENT_TOKEN_TO_BE_REPLACED

Heather Boushey is the Executive Director and Chief Economist at Washington Center for Equitable Growth and Senior Economist at the Center for American Progress. Her work focuses on employment, social policy, and family economic well-being. END_OF_DOCUMENT_TOKEN_TO_BE_REPLACED

The zen of rainmaking

Mary Cranston is a former litigator who became the first woman ever to lead a global law firm as the Chair of Pillsbury, Winthrop, Shaw, Pittman LLP from 1999 to 2006. During her time there, she increased revenues of the firm’s top 100 clients by 50%, improved firm profits and profits per partner by over 125%, and acted as her firm's chief external spokesperson, increasing positive press mentions by 750%. She also closed two of the largest law firm mergers in history, on budget and on schedule, increasing annual gross revenues from $224M to $574M. (Note how her bio uses objective metrics to set out her accomplishments: copy that.) Today, Cranston sits on the boards of five public companies and works to increase the number of women on corporate boards.

END_OF_DOCUMENT_TOKEN_TO_BE_REPLACED

The youngest person ever to make partner: the sponsorship effect

Mika Mayer graduated from college with a degree in chemical engineering. She later got her law degree and started working at Morrison & Foerster (MoFo) in Silicon Valley. Very early in her career, she began working with a partner who quickly took her under his wing and became her sponsor: Thomas Ciotti.

END_OF_DOCUMENT_TOKEN_TO_BE_REPLACED

Susan Mac Cormac began her career in New York and then moved as a third-year associate to Morrison & Foerster (MoFo) in San Francisco, where she “grew up doing deals, some M&A, some private equity, and some venture for a series of men.” Within a few years starting at MoFo, she made partner. She found, as many women do, that she needed to over-prepare: “To do what I do, I have to be more prepared than anybody else. I spend an incredible amount of time being prepared and then acting like I'm not prepared. I act like I'm winging it with the men when I'm presenting, and people think I'm speaking off-the-cuff, when in fact I over-prepare.” Mac Cormac’s statement shows her adeptness at navigating the unique challenges office politics pose for women. Many studies document that women have to provide more evidence of competence than men in order to be seen as equally capable, a pattern known as Prove It Again!, detailed at www.newgirlsnet.com. But Mac Cormac’s strategy of presenting herself as if she were speaking off-the-cuff also ensures that she is not seen as “bossy,” which is viewed often as a negative quality when displayed by women. Mac Cormac calls this “the price of perfection.” Her experience is emblematic of a pattern called the Tightrope: women sometimes have to walk a tightrope between being liked but not respected, or respected but not liked. This pattern is further described at www.newgirlsnet.com.

END_OF_DOCUMENT_TOKEN_TO_BE_REPLACED

How does a corporate lawyer become a rainmaker? Broad skills and a few specialties

From the start, Lizanne Thomas knew her focus would be on business. “I stress to all of our junior lawyers [that], if business as a topic does not engage you, . . . you really need to take a deep breath and think about whether or not you have chosen a career path that is fulfilling for you. You need to be someone who reads the Wall Street Journal because it is interesting. You need to be interested in the industries in which your clients are present. You can’t know one mattress company. You need to know how all of the mattress companies are doing.” Thomas is so personally involved with the companies she represents that “there are some brands of bread that [she] cannot bring into [her] house.”

END_OF_DOCUMENT_TOKEN_TO_BE_REPLACED

What Works for Women at Work 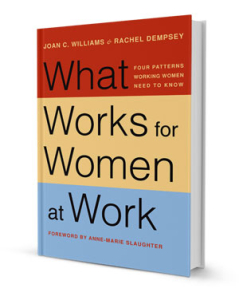 Study after study reports that implicit bias is still pervasive. But few books ask: how can women effectively navigate careers in workplaces shaped by subtle bias?

In What Works for Women at Work, mother-daughter team Joan C. Williams and Rachel Dempsey look through a multi-generational lens at the varied experiences of women in the workplace. The authors identify four patterns of gender bias that they repeatedly encounter in their research, providing insights into gendered office politics and reporting on strategies highly successful women have used to counter each of the patterns. END_OF_DOCUMENT_TOKEN_TO_BE_REPLACED

The Cutting Edge Conference convenes professionals from diverse fields - law, business, tech and others - to engage in a creative dialogue around a shared commitment to gender equity and diversity.